On Not Making the Headlines 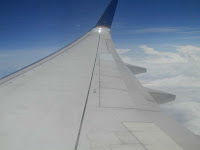 Okay, here’s the truth, I don’t hate leaving per se (see previous post). I hate being left more than I leaving. I hate leaving because, I dread flying. N0. Im not afraid of heights. I love heights. Getting to the top & seeing everything below somewhat gives me a victorious feeling. But the descending part..argh! That’s what I can’t stand. My ears are in so much pain as airplane lands that I feel I will never be able to hear again or my head will explode any second. And worse, tomorrows newspaper headline will say, “Lady who just landed popped her ear out”. It’s not the type of news I want to make.

I was told many times before that I should chew gum or swallow as the plane lands. I did both. But not one alleviated the pain or at least lessen even for a bit the ear pain I had experienced. So how do I keep my ears painfree when flying? Why does it seem that I’m the only one who had experience that during that flight? Are my ears different from yours?

I am going on a trip in a few days and so I googled my dilemma. I'm going to share what I found. Ear pain is caused by unequal pressures that develop on either side of the eardrum as the plane descends. Sucking sweets and gently blowing against a closed nose and mouth will usually push air into the middle ear, through the Eustachian tube, equalise the pressure and ease the pain. However some people’s Eustachian tube are too narrow or blocked due to certain conditions like colds, that prevents air from going to the middle ear. That’s why it’s more troublesome for them to get rid of the ear pain. Some people who are prone to this problem take antihistamines or decongestants during the flight. But another source said to avoid taking decongestants as they have side-effects such as dry mouth and drowsiness that exacerbate jetlag. Who would want that? Hmm… ear pain vs. jetlag? You choose.

I guess I just have to try again. Maybe this time my ear won’t pop in pain. I don’t like headlines.

More Tips:
1) Chew or swallow. Some airlines offer sweets for you to chew on. That's sweet. ;p
2) Blow while holding your nostrils & keeping your mouth shut.
3) Yawn but don’t sleep. You won’t be able to chew, swallow or blow when you’re busy zzzzzzzz-ing.
4) Take anti-histamine as this help in limiting mucus that clogs your airways.
5) Spray your nose with decongestant an hour before landing then after 5 mins. Then every after 20mins til landing.
(I just read these things, I’m not sure if these work)
6) Ear plugs rock too! They help in slowing down air pressure changes outside your ear so your inner ear can adjust to the pressure changes. They block noise too.

When All things Fail:
1) Earpain usually subsides quickly. Painkillers will help to ease it more quickly though.
2) See your doctor if the pain or dulled hearing persist for days.