Value for Your Money 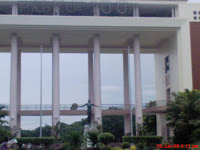 I roughly read something about Lucio Tan’s Daughter writing about him. It wasn’t about how rich & powerful they were or how great his father was as a business tyrant like what was always written about them.

She related how her life as a student when she was studying abroad. Before she entered college, she was determined not to be influenced by peer pressure (drugs, sex & cutting classes). She swore she’s going to study well & get good grades as she always did. but it soon took toil on her. She gave in. She figured, her father wont learn about it anyway as she was so far to check on. But somehow, her father learned about it. She expected grounding, hours of reprimanding & all. But her father just said that he never got the chance of really going to school & enjoy learning. He can give anything & everything to his daughter (now that they literally have everything)but not the value of getting an education & actually learning. He can give her anything she wants & needs but not knowledge. Well, he was right. Sure they can afford around the world trips, expensive bags, latest techie tools, education abroad but no one can really buy knowledge & wisdom.

I just hope that people see it the way he does. I guess my parents saw that too. We are surely not as rich as the Tan’s or any millionaire or billionaire for that matter. We just get by each day with a minimum wage earner parents. But they made sure we are sent to a good school where we can be educated and be equipped with what we need to survive life. Fortunately & unconsciously, we never took that for granted. We all got good grades, graduated on time, got awards even though we were sometimes carefree with our teenage life and got my parents frustrated & fearful of what we will become in the future. Everything went well. My ate worked for an NGO before she transferred working for the government. My younger sister recently graduated & now works for one of the biggest bank in the country. Im a licensed professional managing a Paediatric clinic and now discerning if I should further my career abroad.

We are not earning as much as Lucio Tan does (nor we wished to be like him), or have a house as big as an entire city or a million worth car, or a 6-8 digit bank account. But it just feels good that somehow we have something no one can take away from us, something priceless, something valuable & not even a Lucio Tan can buy.
>>> just my luck on 6/29/2008 10:29:00 PM